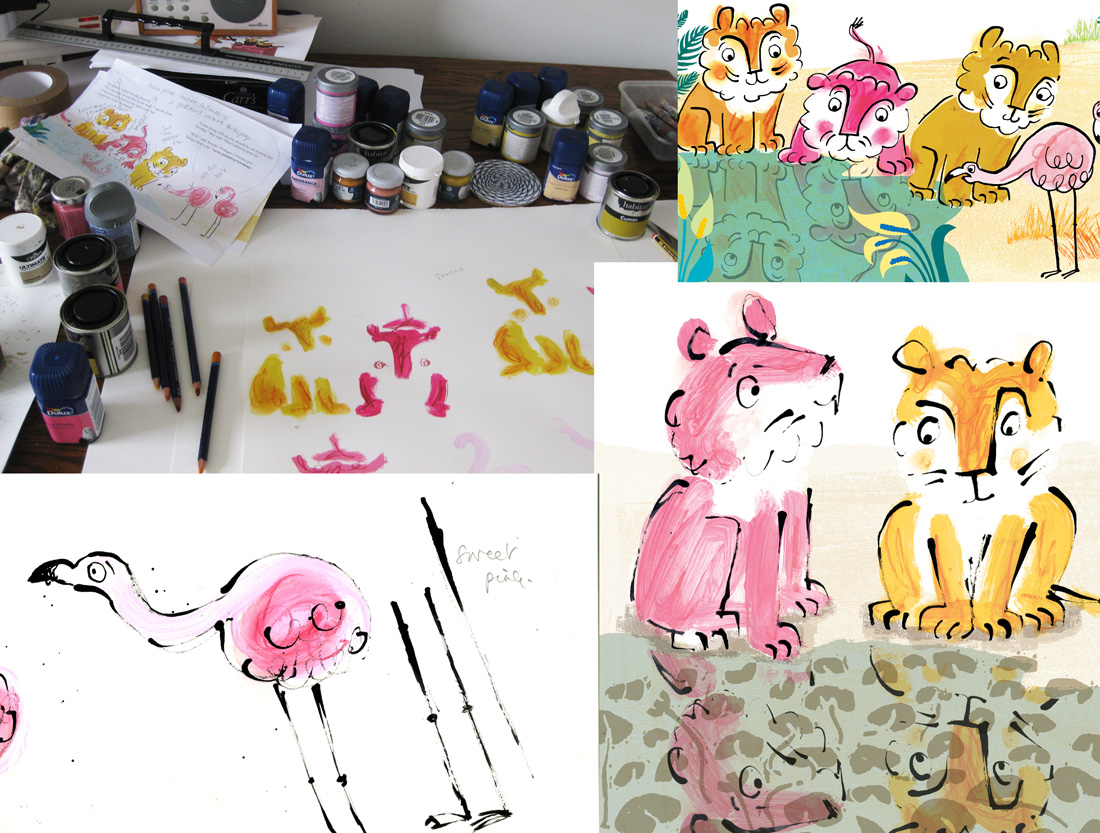 I’m busy in the studio experimenting with different media for my new book, Pink Lion – to be published by Walker some time next year. Because of the story, the predominant colours are yellow and pink – sadly not complementary colours, so I have become very fussy about exact shades of mustard, coral, bubblegum etc. in my attempt to find the right ones.

Browsing through a book of Picasso’s drawings and paintings, I saw that he often used household paint. So I nipped down to Homebase and came back with a bag of tester pots with delicious names like Cumin and Hibiscus, and have been having fun experimenting with some very rudimentary old school brushes, scribbly pencil and line applied in Indian ink with a chopstick. I’ve also been trying out a more digital approach.

More on this project soon! 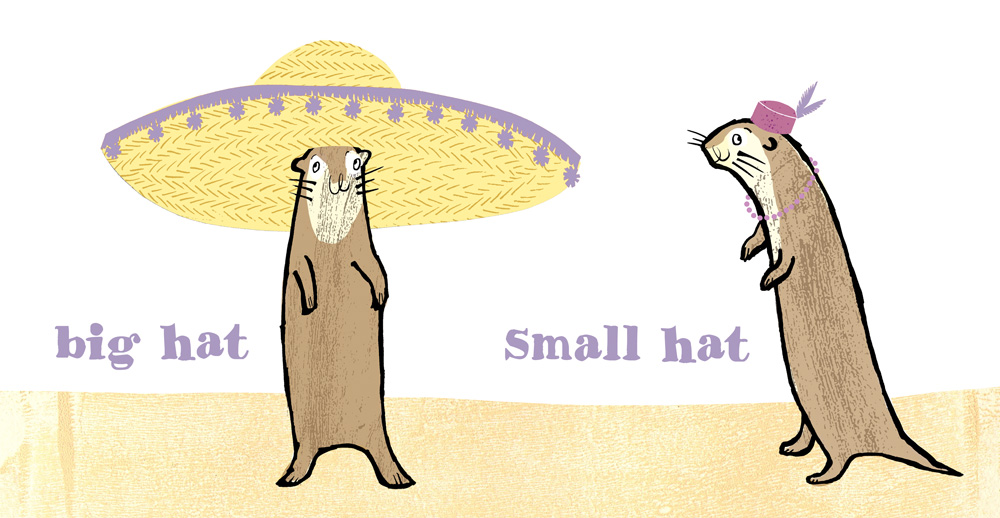 Trying on hats at the Otter Hat Shop… 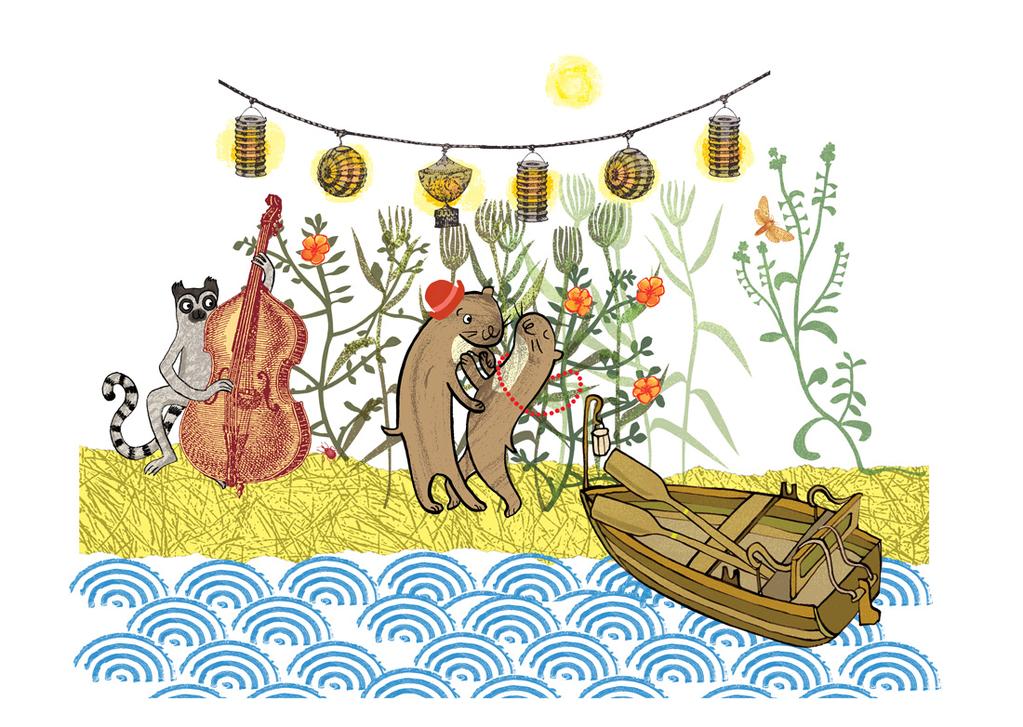 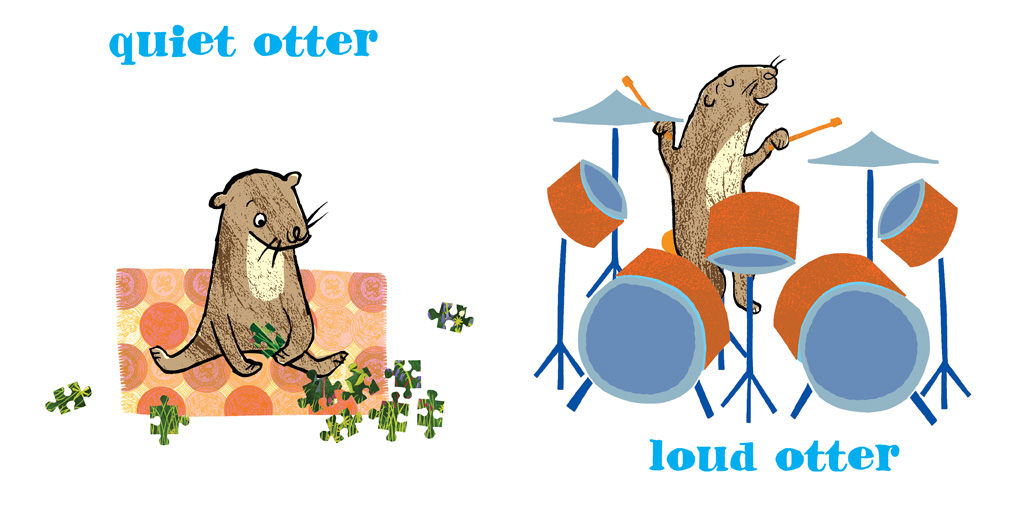 Here’s a sample from an idea I’ve been working on for a while – otters whose houseboat is invaded by river pirates. I’d love to do a book with a houseboat in it – because I would not-so-secretly like to live on one. 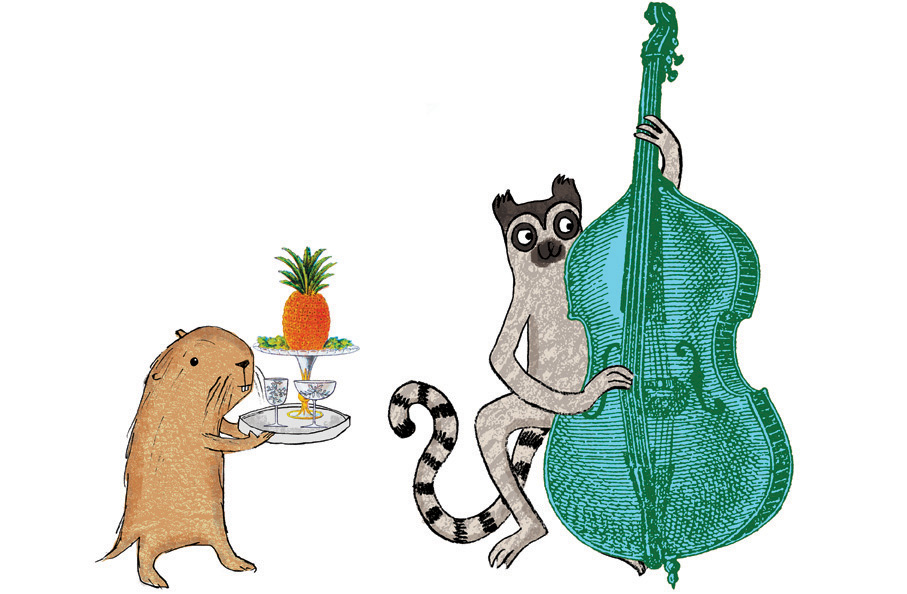 Here’s another spread from ‘the one that got away’ – I remember having a lot of fun throwing the custard creams and pink wafers all over the spread – who knew how many foxes carry in their handbags? Maybe the leopard is busking for biscuits with his pan-pipes…

I’ve started this year with a craving to experiment more with non-digital artwork, and it’s been a great pleasure spreading out tubes of goache, colourful inks and tiny watercolour pans. I’m even trying working without black lines – for these two lions I used orange waterproof ink, then used a mix of watercolour, goache and coloured pencil, and finished by adding some texture with a home-made rubber stamp. I like the way it’s not too polished.

Thinking about lions reminded me of something in one of the ‘Reginald Perrin’ books by David Nobbs, which I read many many years ago…for some reason I never forgot a scene where Reggie had gone to a safari park with his grandchildren, and one of them looked at the lions and asked “Why are lines lines?”. It amused me then and it still does, something about the complete un-answerability of it, the funny phonetics, and the fact that it’s actually such a good question.

A couple of years ago I developed a project for a publisher with a pair of books full of holes – Peepholes: Paws and Claws and Peepholes: Fins and Flippers. The idea was that the child reading would spot a tiny bit of an animal through a hole in the page, then turn over to see if they had guessed what it was correctly. It was great fun but a very very fiddly job getting the holes to appear in the right places – so that you could see just enough without it cutting into the image on the left-hand part of the spread.

Despite the publisher’s enthusiasm, sadly when the books went to Frankfurt and Bologna they didn’t get any co-editions, and therefore became financially unsupportable (the holes add to the production costs). The word was that it was too sophisticated for a very young audience, yet too simple for older children. We even re-formatted it to be simpler and squarer, with fewer holes – but still the international buyers didn’t bite, and unfortunately the book wasn’t to be. But I’m still proud of the project, and I thought enough time has now passed to show some of the spreads from the book here. The yellow spread with the moose is an early version – the publisher said these animals were too ‘educational’ so I re-drew them in a less realistic way. Looking back though, I think I prefer this original version. I’m rather fond of the cheeky monkey playing the guitar.

I was experimenting a lot with textures at the time – in the spreads shown here there’s some sawn timber, a view of the skyline in Berlin, gravestones in Hackney and windfall golden plums. Every picture tells a story! I do feel sad that this book never saw the light of day, but at least I did get paid. And I certainly learned a great deal from the experience – not least, that nothing is ever certain.

Merry Christmas and a Happy New Year to one and all! Here’s a little lion looking forward to opening his present – I wonder what’s inside?