I’ve got lots of exciting projects in the pipeline at the moment, which is a very nice way to begin 2018. The collage snippets shown above are from a picture book due for publication in 2019 with Otter Barry Books – ‘Brian The Brave’, written by Paul Stewart and illustrated by me. The main characters in this lovely story are sheep, but I won’t show those until nearer the publication date.

It’s great to be collaborating with Paul again (our previous picture book, ‘Wings!’, was published by Otter Barry Books in 2016) – and one of the things he suggested in his notes was that the landscape should look a bit like Yorkshire. I love Yorkshire so was delighted to oblige! I have been having fun putting together scenes with dry stone walls and abundant wildflowers such as meadowsweet, red campion, clover, buttercups and reed mace, and including favourite birds like lapwings and grey wagtails – and some damselflies for a scene including a pond. 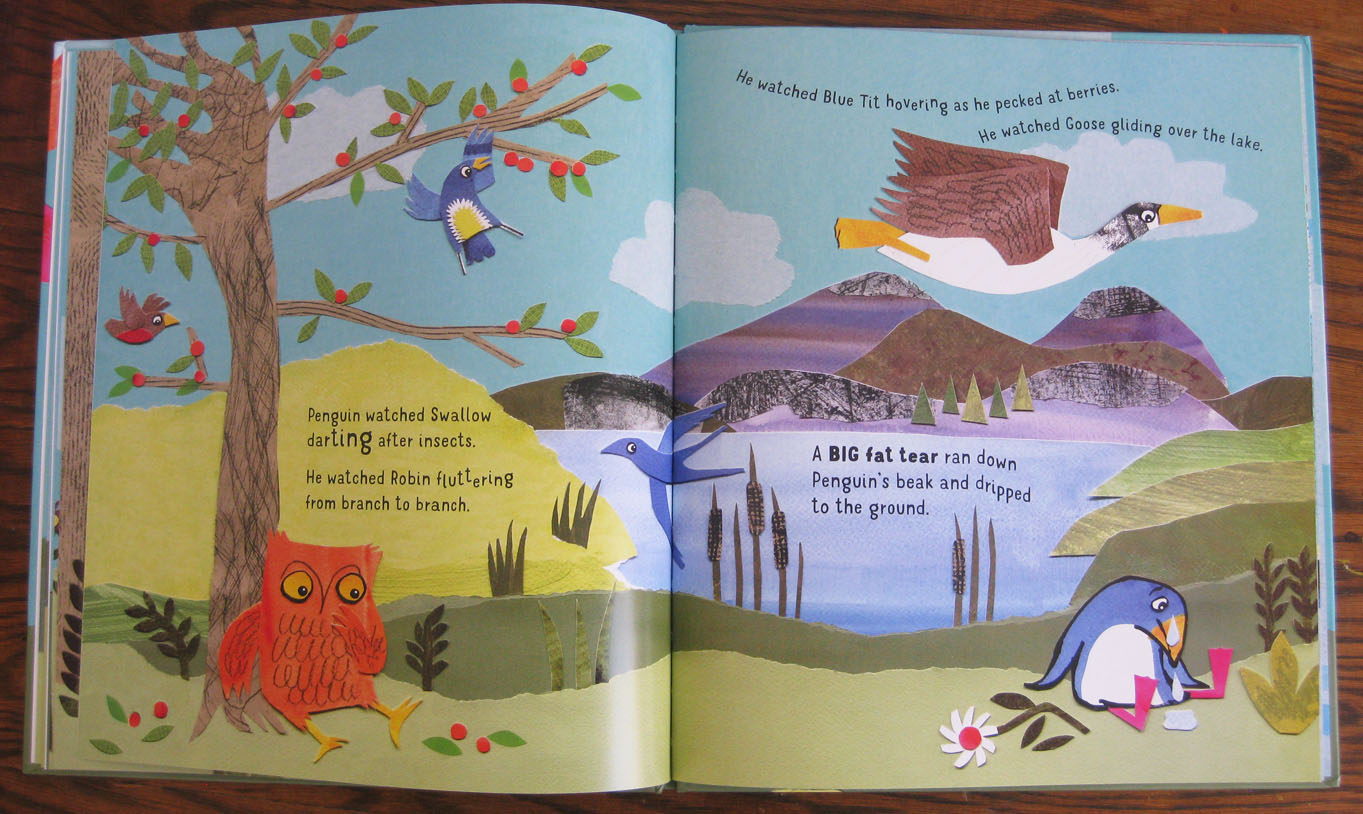 I’ve been writing a lot lately – more than drawing, in fact. One of my new projects is developing an idea for a young fiction series. I’m enjoying plotting in a longer form, which is new to me, and it feels like a luxury to have more than 12 double page spreads to fill with action. It’s interesting to feel my way through the process – I can’t help tackling it visually and have created a pile of charts with notes on colourful scraps and taped-on extensions to try and help pull the different elements of the story together. I’m also playing with how the characters might look, and finding a completely non-digital approach quite refreshing…

It’s now over a year since I started keeping a comic diary, inspired by homework set on the Graphic Novel course I did last year at the Royal Drawing School, with excellent teaching by comics artist Emily Haworth Booth. I no longer do it every single day, usually a couple of times a week, but it has proved a wonderful space to reflect and record all the hundreds of small things that make up day-to-day life, and otherwise just get forgotten. I’ve got lots of entries inspired by all the funny things the three-year-olds say at my under 5s art group, one about unblocking the sink, and rather a lot involving a pint of beer at the pub. Dipping back into my comic diary from last year brings back so many things that would have been lost forever otherwise, so thankyou Emily for getting me started!

Here’s a sad one from last weekend, featuring a dead owl and a game of dominoes. 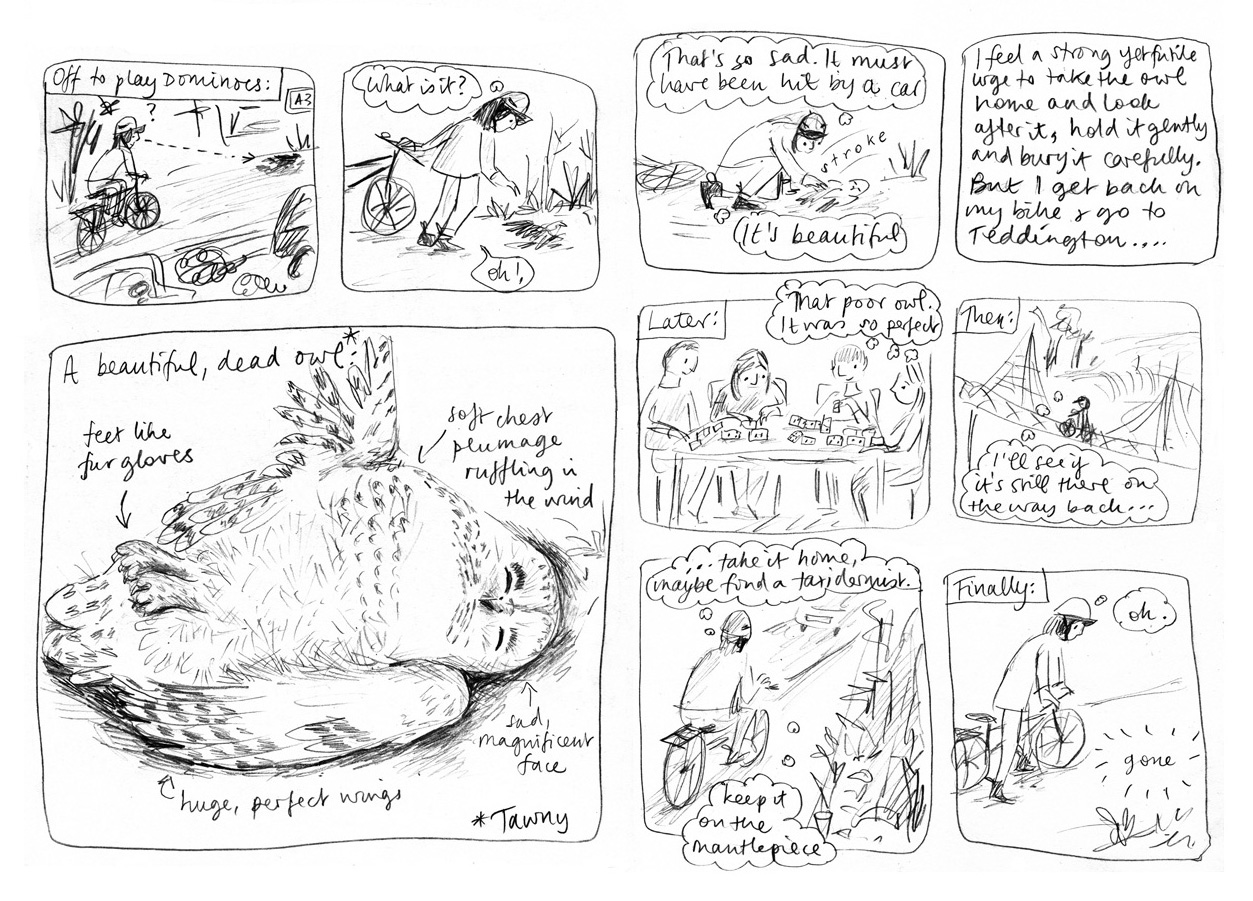 I’ve got lots of exciting new projects in development for 2016. One is a picture book about a bowerbird and an orangutan – more on this later I hope, but in the meantime here are some character sketches using household paint, watercolour pencil, and good old Quink.

I’ve been very busy with my scissors lately, working on spreads for a brand new picture book to be published by Otter Barry Books next year. It’s a charming text by Paul Stewart about a penguin who wishes he could fly – with many other bird species included in the story, so great fun to illustrate.

I’m doing the book entirely in collage, so have been racing through the Pritt sticks. My studio is covered in colourful swatches, and I even have a box of eyes of all sizes ready to be used. It’s a medium I really enjoy working in – I’m using all sorts of scraps, some made with paint, others ink, and some are fragments of monoprinted textures left over from my community art project in Twickenham earlier in the year.

I’ve been asked by a publisher to do some samples for a picture book about birds – it would be a dream job for me as birds are just about my favourite thing to draw. But, perhaps because it feels such a perfect opportunity, I’ve got tangled up in knots trying too hard, and have spent ages doing lots of research, and filling dozens of sheets with all sorts of birds in many poses, media and colours.

It became clear that what I really needed to do was simplify, and loosen up – which is much easier said than done. Then something unexpected intervened: a week or so ago I was at the monthly river cleanup organised by the Wandle Trust, up to my waist in the icy waters of the river Wandle in chest waders, fishing out rubbish with my hands in just a pair of heavy duty rubber gloves. After a couple of hours my hands went numb so I worked on the bank instead. Even after a hot bath back at home my fingers were numb, and a week later the tips of my middle fingers are still numb – and this has affected my drawing style. I normally grip a pencil or pen very hard, but it’s forced my hand too be more relaxed. (Although I do hope my fingers will come back to life soon…)

I’ve also been using a feather to draw with (dipped in Indian ink) – and when I produced this little kiwi I felt I had perhaps cracked something – it’s got the looseness I was aiming for. Last summer I heard Helen Stephens give a talk, and she gave away another tip for how she achieves her wonderful flowing relaxed lines – she stands up when she is working. Another technique to try!

My exhibition of woodcuts and collage inspired by the river Thames, Skim Sky Blue, closes tomorrow, Sunday 18th May. Above is a selection of the framed prints on show – each one consists of a block-printed woodcut augmented with hand-cut and torn collage,using a variety of media ranging from watercolour to oil – and even a few washes of mud from the Thames itself. As they are too large to scan it’s difficult to capture them it’s difficult to capture the whiteness of the paper or the gloss of the oil-based inks – but here is an impression at least. It’s been very enjoyable creating an exhibition entirely to my own brief – and I feel as if it’s something I’d like to expand, as there are so many more aspects of the river still to explore through this medium. (see the previous post for all sorts of info about why I love the river so much). One day I plan to collect mud samples from the whole river and create a colour chart…

I’ve just spent another couple of days at the London Print Studio finalising prints for my exhibition next week, Skim Sky Blue – part of Wandsworth Arts Festival Fringe: there’s a bit of a preview of some of the images shown above. Over the weekend I’ll be doing a little bit of extra collage work and starting on the framing. The big parcel with a blue ribbon is all my used printing plates, ready to take home – I didn’t count them but they were very numerous and carving them has left me with a worn patch on the side of my little finger. That aside it’s been very enjoyable working completely non-digitally for a change…

Cormorants are one of my favourite birds – I love their craggy profile and their habit of standing rather awkwardly with their wings out, soaking up any winter sun that’s available. I was always very fond of Graculus in the Noggin the Nog stories – it’s never entirely clear what species he is, but he must be closely related to the cormorant family.

There are so many of these magnificent creatures on the Thames these days, particularly in winter, and there’s a particular tree on Stephens’ Eyot just downstream of Kingston that always has quite a group of them perched in its branches. I watched some diving near Chiswick the other day – they whirl round like a Catherine wheel on a pivot before they disappear underwater, often for quite a long time.

Dawdling on the towpath is all part of the preparation I’m doing for the exhibition I’ll be holding at The Art Cabin this May – it’s inspired by the river Thames, and I’ll be posting lots more about this as things develop. I’m looking forward to experimenting with collage and paint, and also to learning how to make woodcuts at the London Print Studio.