After six months of research, planning, workshops and tonnes of scanning – it’s finally here! My community art project with Sue Edkins was launched yesterday at Diamond Jubilee Gardens, Twickenham, under a blazing hot sun with many of the participants – from age 8 to over 80 – there to see their work on public display for the first time.

As I posted when we first began in January, the project is Twickenham’s version of the ‘Fourth Plinth’ – a public work of art that changes every couple of years. In Twickenham’s case, however, it also involves the community, and the work of many, many hands can be seen in the three finished pieces.

Four classes of children from St Stephen’s Primary School took part, producing the most characterful set of drawings based on stories and postcards showing Twickenham’s involvement in WW1, from sporting heroes at The Front, to the Belgian refugee community, to Richmond Park as a training camp and convalescent hospital. They also made monoprinted textures, and experimented mixing paint to create panels for collage.

We also had a huge number of collage motifs, created by two groups of older people and also by members of the public who came to a drop-in workshop in the park. These form a decorative border around the three panels.

With a red-hot scanner burning up from working so hard, we pieced together these hundreds of individual elements digitally to create three colour-keyed scenes telling the story of Twickenham’s War.

The frames were appropriately covered up with camoflage netting to increase excitement as we waited for the big moment – then the children helped whisk off the net and then immediately rushed around spotting their own work – a lovely moment we’d been waiting for a long time!

The work will be on display until 2018 when the centenary years of WW1 come to an end – so if you are near Twickenham, do go and take a look – there’s an excellent cafe in the park and a lovely river view into the bargain.

Many thanks to the many people who made the project possible – to the Arts Team of the London Borough of Richmond upon Thames at Orleans House especially Rachel and Carla for commissioning us, giving us studio space and being fantastically supportive, to everyone who helped with the research, especially Helen Barker, and to Ruby, Anna, and Ashley who all helped with the workshops, to St Stephen’s Primary School for taking part so enthusiastically, and to the Greenwood Centre in Hampton and St Stephen’s Church Monday Fellowship Group for producing beautiful motifs. And finally to Jagon, Chris, Luke, Roger and Mark for helping install the work in Roger’s amazing Frame! 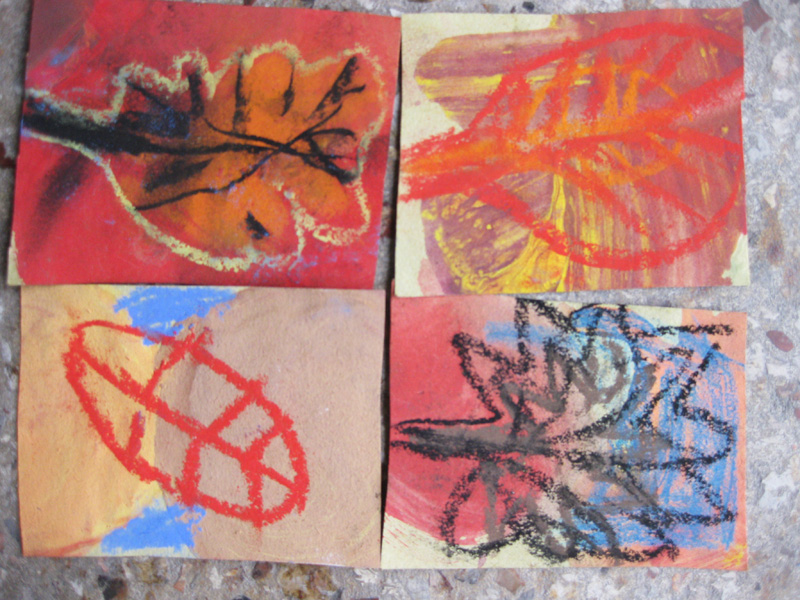 How do you get nearly 600 children to participate in a school mural project? That was the challenge to be tackled when Hallfield Primary School in Bayswater invited me to come and fill some empty display boards in one of their curving corridors. The school was designed in 1951 by architect Denys Lasdun to be filled with light, curved spaces and tree-filled courtyards – it is a real gem. Lasdun’s original concept drawings for the school showed the classrooms as leaves, dining area as pea pods and hall space as a flower. This seemed a good starting point for the mural – a black and white outline over blocks of colour, with a leaf for each class just as Lasdun had planned – except that now there are 24 classes in the school.

Over the last couple of weeks the teachers have been working with their classes to make leaves using different media and carefully controlled colour palettes so hat the resulting leaves could be divided into four seasons. The result was hundreds of miniature works of art, in pastel lines over painted patterns, printed from real leaves, in pen, collage and chalk. I used hairspray to fix chalk and pastels, but charcoal was a bit more challenging. I’d also recommend checking any marker pens for bleed first. Having painted the background shapes I then used pva to glue all the small leaves within the big leaves – and now it’s finished.

I’d been at the school in February for a drawing project and it was lovely to be remembered by lots of the children. I also enjoyed hearing them rehearse their school production of ‘Skellig’ while I worked. 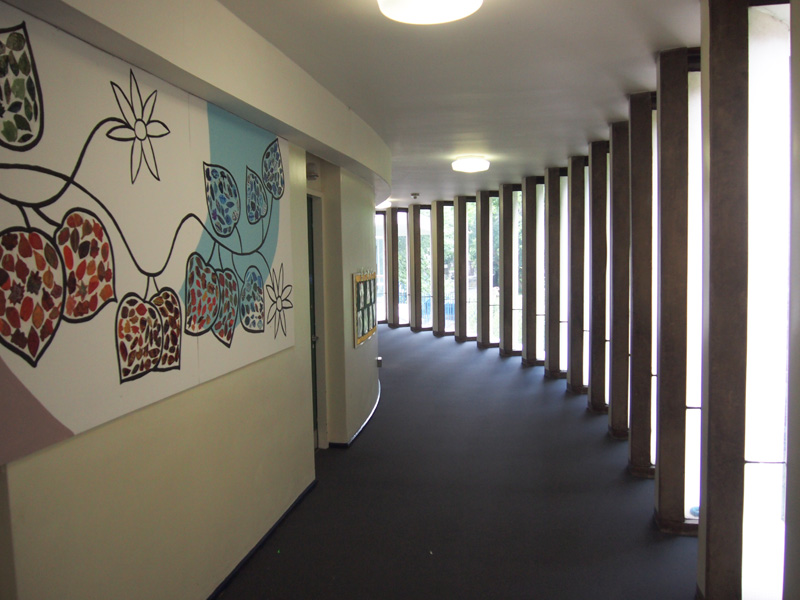 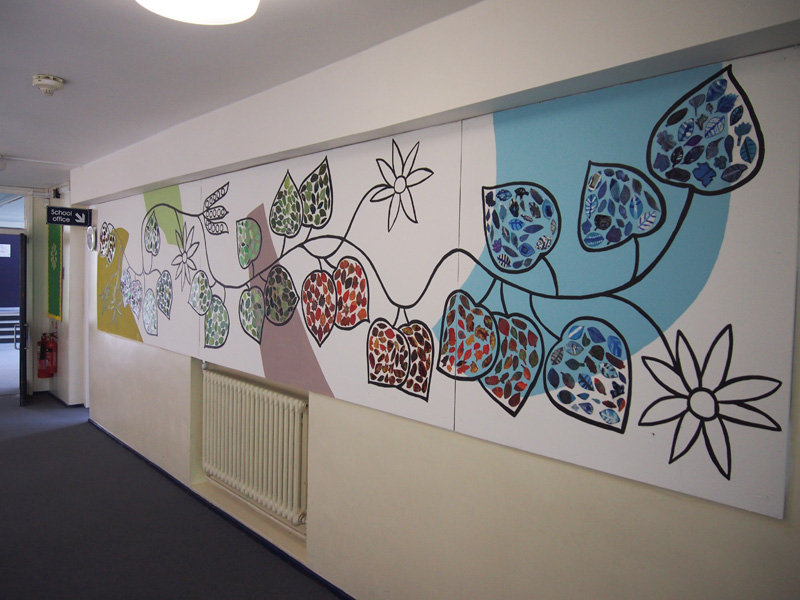 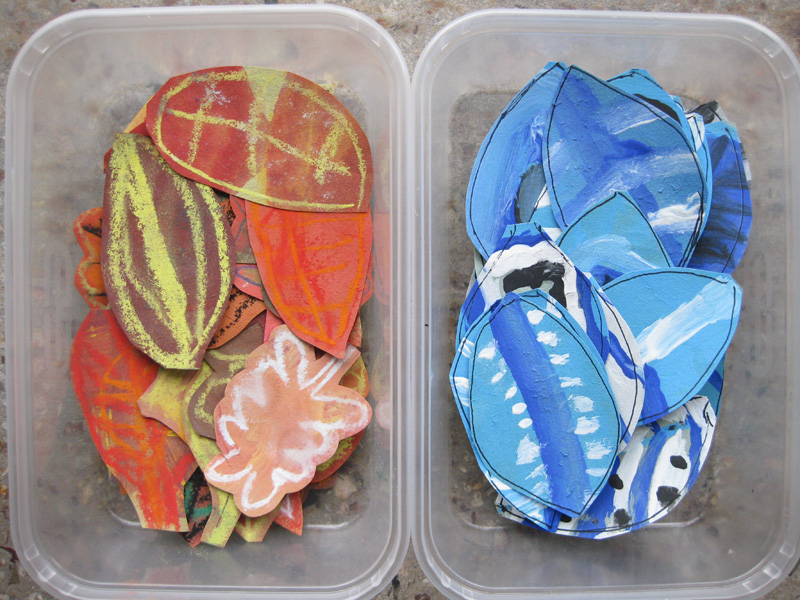 The younger classes began by mixing colours and creating printing blocks with foam sheets from the marvellous Work and Play scrap store in Tooting.

Next we cut out the printed waves and pebbles and stuck them on a huge blue roll of paper, also from the scrap store. These represent the swimming pool and running track. The collage also included bits of old maps and circles cut from catalogues with my badge-maker circle-cutter. 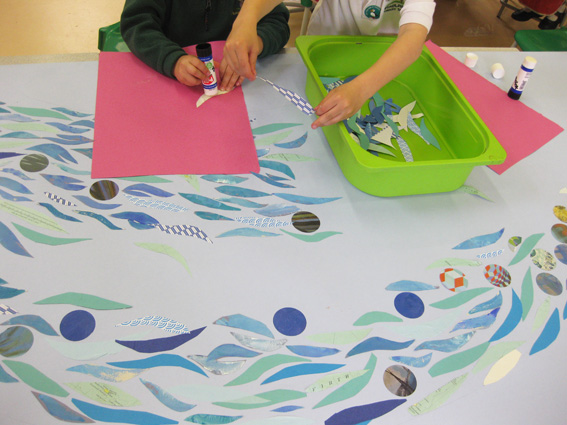 Next Y4 and Y6 looked at reference pictures of sports and created their own running and swimming printing blocks. We inked them up with rollers and printed them on the paper overlaying the background collage. 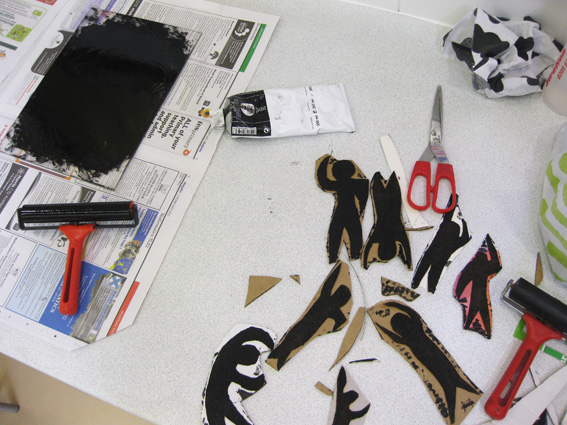 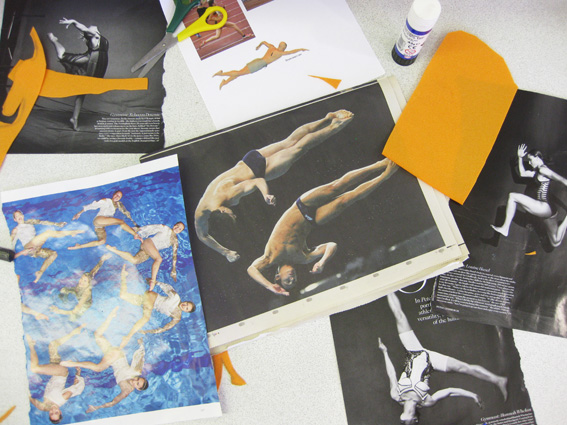 Finally we added some text in a flowing line using some old letterpress blocks lent to me by mosaic artist Sue Edkins. I also did a Q&A session in assembly about being an illustrator. Lots of budding illustrators at that school are already making their own comic books at home – wish I could have seen them. 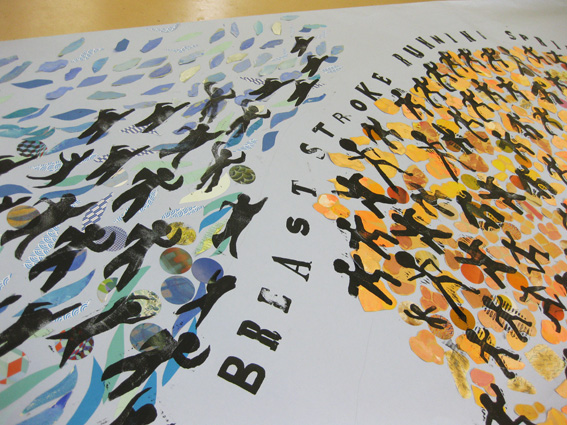 The project began with three days working with the whole school, class by class, creating colurful birds, leaves, flowers and buildings using a variety of media from acrylic to collage and coloured pencil.

Year 2 created some amazing collage vehicles, while Year 3 drew their own homes with great detail and a dash of imagination:

Other year groups experimented with colour mixing to create dozens of different shades for bricks and leaves, year 4 drew beautiful birds and year 6 worked in groups to make large collage/drawings of key buildings in or connected to the area, including Southwark Cathedral as a focal point.

I painted their drawings onto the boards and collaged on the cut out bricks, then added all the richness of bird and plant life, as well as the homes and vehicles that the children created (including an unfeasibly large number of tanks!).

It’s the third time I’ve worked at St Paul’s and it was lovely to recognise so many children and to see how their creative work has developed over the years. 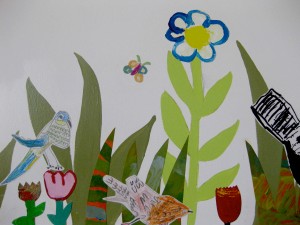 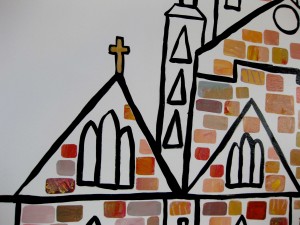 Today was the last day of the library project at Singlegate Primary School in Colliers Wood. All term I’ve been working on Friday afternoons with a group of children from different classes, making an installation for the library – including a wall hanging complete with collage nests, a flock of papier mache birds (I specially like this one with the smart scarf): 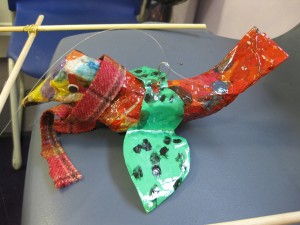 and – since the project is in the library – a set of hand-made books about the birds:

They were a great group and I will miss them all! 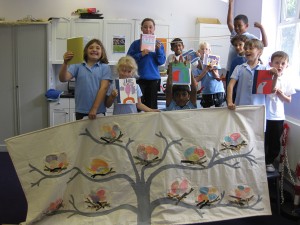 I’ve just painted a coat of satin finish yacht varnish on all four of the panels for the mural made with the G&T art club at Singlegate Primary School in Colliers Wood – so now they are ready to be fixed to the front of the school. The last session of the workshops was yesterday, and we made sketchbooks from scrap paper and badges. Next term I’m back at the school to do a new bird-themed project there.

The Monday art club at Singlegate Primary School in Colliers Wood have been hard at work painting out their designs for the four-panel mural. It’s on a railway theme, but with some extras like a blue rainbow and a flock of coloured birds.

I’m working with a small group of gifted and talented pupils at Singlegate Primary School in Colliers Wood this term – we are making four mural panels on a railway theme to go outside the main entrance of the school. Last week the children did some drawings, and I have made their work into these designs. We couldn’t start painting today because the school was closed by the heavy snowfall, but we’ll get going next week. The panels are 2.4m long each. 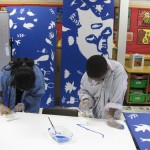 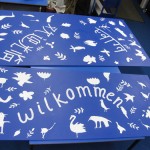 This week I’ve been working on a four panel mural with three classes of Year 4 children at Burlington Junior School in New Malden. Each child painted a bird or leaf then I wrote welcome in seven different languages. The panels will be put up outside the main entrance to the school.

I created this mural with all the year 4s at Burlington Junior School in New Malden. Each panel represents a continent, and each child drew an outline of a favourite animal from that continent and helped paint around it. I completed the project by writing welcome in six languages, from Korean to Tamil. 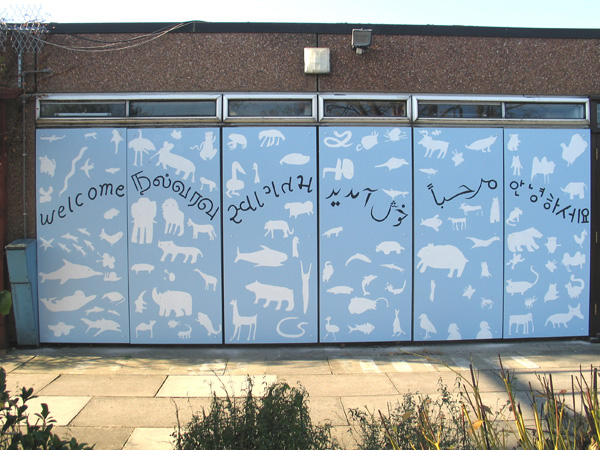