I’ve just finished a project for Twickenham Museum – a large canvas backdrop for their forthcoming exhibition commemorating the 100th anniversary of the Battle of the Somme. I worked with a lovely group of Year 9 students from St Richard Reynolds Catholic College, also in Twickenham, over two days.

Day 1 began with a visit to the museum, after which we looked at the paintings of WW1 artist Paul Nash. Although Nash didn’t reach The Front until 1917, I felt his striking and intense battle-scarred landscapes would be a good starting point for the students. We then made collagraph plates by sticking string, rice and corrugated scraps onto cardboard – this was to represent barbed wire, shell explosions, and torn duckboards. We then used mixed media to create a reduced scale collage to plan the composition for the final backdrop.

Day 2 saw the students cutting blasted trees from black felt (sourced from the wonderful Work and Play scrapstore) and then getting stuck into some embroidery. I must admit I had wondered if this would be the least-favourite element for a group of teenagers, but in fact they couldn’t put those needles down, and the detail of the stitching on the trees is one of the best things about the finished work. We also printed the collagraph plates onto fabric – a mixture of linen, cotton and various satin samples in a muted colour palette. Keeping to the paper plan as much as possible, I then finished the piece by assembling on canvas with a mix of PVA glue and Bondaweb.

Many thanks to Twickenham Museum for inviting me to take part in the project, to the Richmond Arts Team at Orleans House, and most of all to the staff and students at St Richard Reynolds Catholic College for all their enthusiasm, ideas and careful stitching. 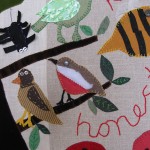 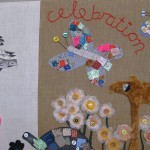 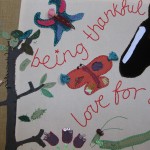 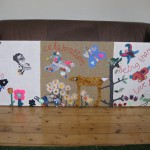 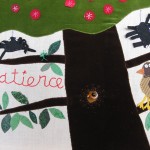 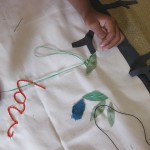 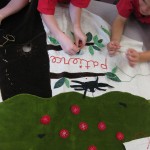 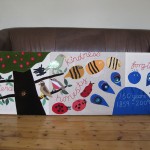 I’ve spent the last week working at St Paul’s C of E primary school, Hook, creating two large textile collage panels to celebrate the school’s 150th anniversary. The red words are the school’s values. Everyone from year 1 up to year 6 took part, and I completed the work by building two wooden frames and stretching the fabric over them for a neat finish. 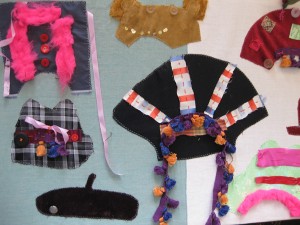 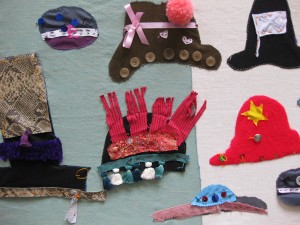 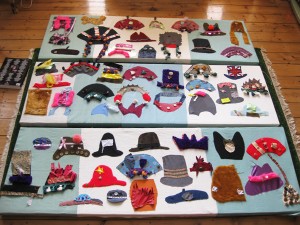 I’ve been making fabric collage hats with Y4 at St Andrews and St Marks, Surbiton – it was for multicultural week, so the hats were from all over the world. The finished work is stretched over three large wooden frames for display in the IT suite.

Today I delivered the finished artwork from the ‘Walk of Art’ project to Crofton Infants’ School in Orpington. There were four panels – around 10m in total length – with feet and legs made by the Year 2 children stitched onto each. Here are some details… 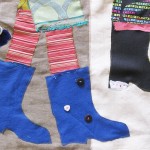 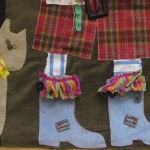 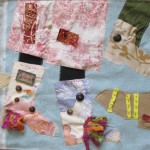 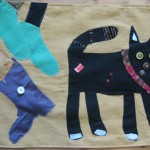 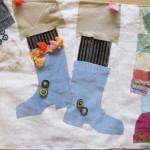 I particularly like the black cat, and the parcel in the last picture – the boy who made it said it is a present for a monkey and if you peep inside you can actually see a yellow banana that he has stitched in there. And here are all four panels together…

This week I’ve been at Crofton Infants’ School in Orpington working with Year Two on a project called ‘Walk of Art’. It’s part of Walk to School Month, and is going to result in a textile banner examining why walking to school can be interesting. 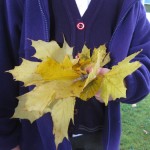 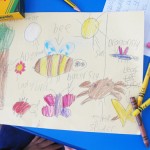 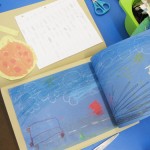 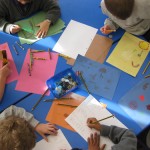 and finally planned some shoes and legs on a giant roll of paper before making some fabric versions using sewing for the final piece. I specially like the next drawing which features four types of conker, including the cheese grater which I had never heard of before… 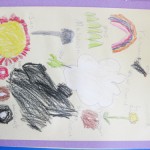 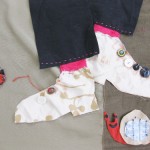 In January I designed and implemented with Sue Edkins a large scale sewing project at Strand-on-the-Green Infants’ School in Chiswick. This involved 270 Key Stage 1 children aged 5-7, resulting in five framed textile collages illustrating the ‘Every Child Matters’ agenda. We thought it was important to include every child in this infant school to underline the ECM message – quite a challenge in a three-form intake school. Nursery children used textile transfer paint to create self-portraits while Reception, Y1 and Y2 made their own individual fabric collages using simple sewing to illustrate topics like healthy living and eating, ‘making a contribution’, and (most challenging of all) achieving economic wellbeing. The resulting scooters, strawberries, piggy banks and many others were colour co-ordinated and fixed to the canvas to create a visually exciting set of images from what can seem a fairly dry topic. 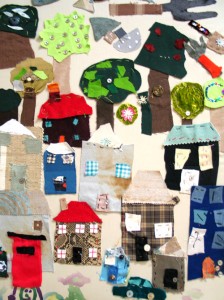