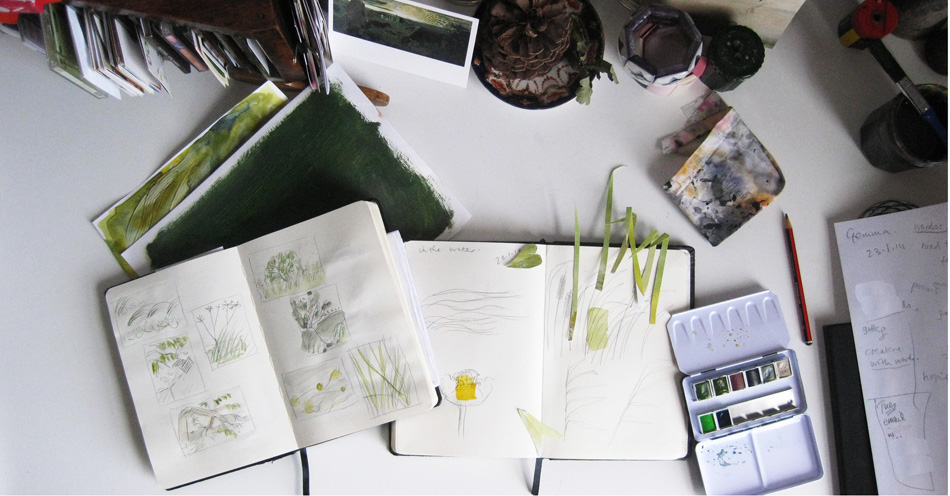 From 2 – 18th May I’m going to be holding an exhibition at The Art Cabin gallery in Southfields, London, inspired by the river Thames. I’m still at the planning and researching stage, but you could say I have been researching it all my life as I’ve always loved the river and spend as much time as possible on it, in it or beside it. Last summer I sculled from Lechlade to Teddington in a traditional Thames skiff (about 120 miles), and also walked the upper, non-navigable parts from the source back through Cricklade. As well as soaking in the sounds and smells of the river I took dozens of photos, and have been using these for reference to draw lots of thumbnails of different aspects of the river. I’ve been preparing surfaces with oil paint and other media for making some collaged work. (I’ve got an excellent colour a friend gave me – it’s Gamblin Torrit Grey, the colour they create when they mix together all the leftover bits of paint in the factory. And it’s exactly the colour the Thames is in winter – perfect!)

Tate Britain has also been a good source of inspiration – I’ve been looking at Thames scenes by Turner, Whistler and Walter Greaves. Very interesting to see all Turner’s sketchbooks and colour trials too. I’ve also been looking at John Piper’s collages from the 1930s.

The exhibition will be called Skim Sky Blue, which is actually a quote from Charles Dickens that I came across while researching a family trail for Kew Bridge Steam Museum. Dickens visited the pumping station in 1850 to write an article in his magazine, Household Words, and when offered a glass of untreated Thames water he said it looked like “a dose of weak magnesia, or that peculiar London liquid known as ‘skim-sky-blue’ but deceitfully sold under the name of milk”. Although he didn’t mean it as a compliment, to me it sounds just right – a little bit ethereal and rather poetic.