Four weeks ago I started an exciting new project – a public art commission, with fellow artist Sue Edkins. As I reported in a previous post, we have the luxury of a studio just behind Orleans House Gallery for the first couple of months of 2015, and we have been using it to develop our ideas and experiment in the medium of collage.

We’ll be working with community groups to produce three large framed works, to be installed in June at Diamond Jubilee Gardens, Twickenham, all on a theme of WW1 and local stories connected with the war. 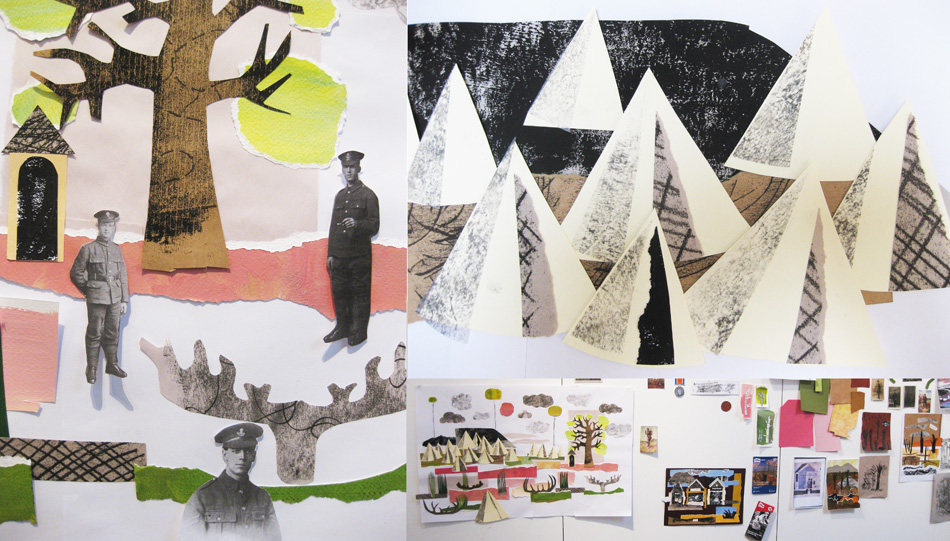 The last few weeks have been spent researching local history – fascinating stories about local heroes like Frank Edwards and Billie Nevill, who are associated with raising morale through football at the front. We’ve also visited the Hearsum Collection at Pembroke Lodge in Richmond Park, to get an idea of what the park was like during the war – it had a South African Military Hospital as well as a huge training camp, and it was also the site for some top secret anti-zeppelin experiments.

We’ve got a wealth of material but needed to develop a visual language for the work. The Imperial War Museum’s current exhibition, Truth and Memory, was very inspiring, particularly Paul Nash’s paintings and drawings of ravaged landscapes and torn trees. And although he was to become a war artist for a later war, John Piper’s loose torn paper collages from the 1930s seemed to trigger some ideas. Working with monoprint to create scratchy, rough textures, and prepared painted sheets within a strict colour palette, we are starting to work out how the work could look, and how school groups can play an important role in making the work.

We’ll be developing our ideas further next week, and visiting the Richmond Local History archive, as well as the Rugby Museum. We’ve also welcomed a new person to the project, Ruby Maddock – a recent graduate looking for experience in the field of community art. Thanks for joining us, Ruby! And many thanks to the arts and education team at Orleans House, Robert and Lauren at the Hearsum Collection, and everyone else who has been so helpful so far.