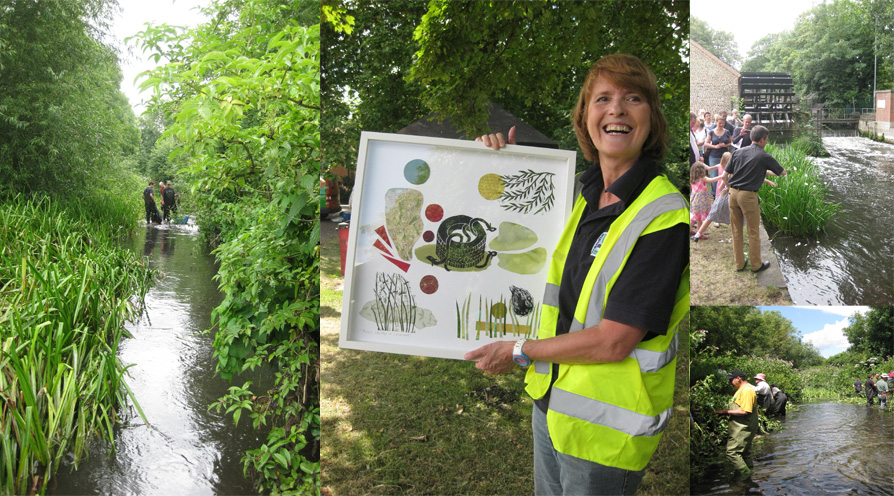 On the second Sunday of every month the Wandle Trust holds a river cleanup – I’ve been going along regularly for over ten years and there’s nothing I like better than standing in the river in waders, watching the damselflies flit past and feeling in the gravelly bottom with my toes for old trolleys, mattresses, car doors, kettles – there’s not much we haven’t pulled out of the river over the years and yes, there have been a number of kitchen sinks. (you can see the alphabet I made from things found in the river here)

For all the time I’ve been involved Erica has organised the cleanups – taking all the waders, wheelbarrows, crowbars, gloves and all the other things we need from the storage unit down to the various spots along the river, contacting the volunteers and liaising with each of the different councils for the rubbish pick-up. She has been the cheerful, smiling heart and soul of the operation and now she is moving to Norfolk, where I am sure some lucky river will be the beneficiary. We’re all going to miss her enormously, and for her last cleanup I made a special version of the Wandle woodcut and collage print from my recent exhibition, Skim Sky Blue. It features eels in a tyre (there are many of both in the river) and, specially for Erica, a coconut as her catch phrase is “there’s always a coconut” – and indeed there always is. I even found an old map of Earlsfield showing the river, and used that in the collage too.

Coincidentally shortly afterwards I was invited by my friend Nick to an ecumenical service at Merton Abbey Mills celebrating the 900th anniversary of Merton Priory – sadly very little remains of it, but we did get to see what’s left of the chapter house, hidden away under a road next to the giant Sainsburys. The service ended with a blessing for the river Wandle, and rose petals were cast on the water.