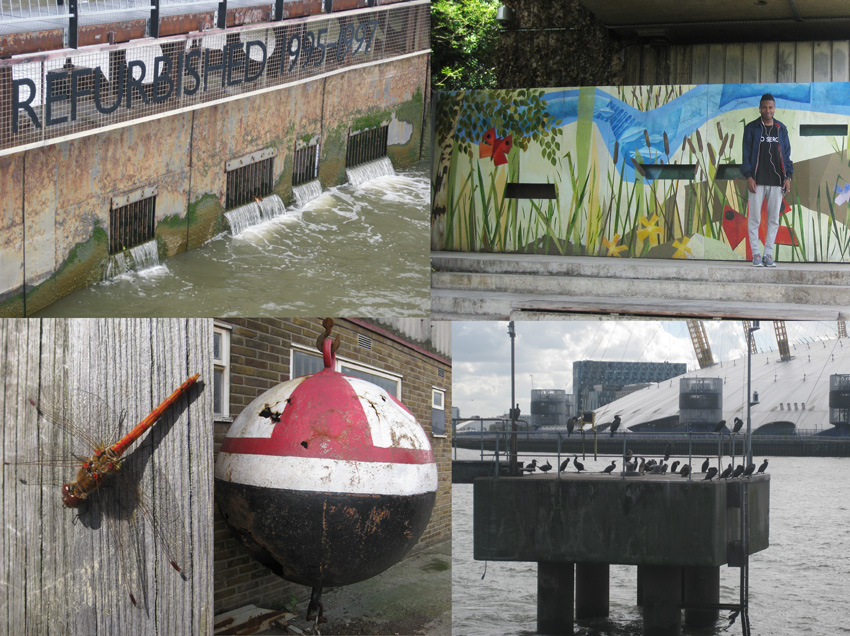 Lea Valley Drift is a walking-based project aimed at encouraging exploration of unexpected, sometimes undeveloped corners of East London’s Docklands and lower Lea Valley. With map in hand I set out to follow the ten mile route – but ended up only completing half because what I found was so interesting that progress was slow. I thoroughly recommend this inspiring urban adventure – it begins with a trip on the Emirates Air Line cablecar – ten minutes high above the wide and silvery Thames, all its curves laid out below you. The vast Victoria Dock is beside you when you land – it even had a beach and billowing deckchairs this week. Trinity Buoy Wharf is approached through a gallery of street art in Orchard Place, home made soup is available in a container cafe while you watch the tugs at work. East India Dock Basin is a developing salt marsh, with ribbons of bird footprints scrawled all over at low tide. Out on the radio shack jetty 35 cormorants were gathered, sunning their wings and surveying the Dome opposite.

The Lea loops like a small intestine, and in one of the loops is a dragonfly-filled paradise, Bow Creek Ecology Park. Under the DLR track there’s a beautiful mural of reeds and rushes. A stretch of industrial park follows, conveyer belts of recycling and stacked yellow skips – and a rather macabre offering on the pavement, a box containing cows’ ankles complete with cloven hooves. A tiny tucked away memorial was next, with an eternal gas flame commemorating gas workers who died in the war. And beyond them is a forest of majestic ornate gasometer skeletons, like an iron colosseum.

Colourful canal barges offer boat rides a little further on, while a dredger was hard at work scooping mats of duckweed from the water. Three Mills and Abbey Mills Pumping Station are magnificent buildings in their own different way, and the Greenway was a revelation. The walk ended for the day at Stratford, but I am looking forward to doing the next section soon.

If you would like to try the walk, email [email protected] for map info!