I’ve just finished putting together a giant hand-made book, using artwork made by children at the Evelina Hospital School in Lambeth, south London. It’s the fourth year in a row I’ve done this very rewarding project, working one-to-one with children on the ward in hospital beds and in the classroom. I am always delighted with what they come up with and in awe of their creativity in very difficult circumstances. The age range of the children who took part went from around 5 to 16, and each of them created something really distinctive and beautiful using a mixture of collage and drawing.

The theme was wildlife in London, particularly focusing on endangered species. Researching the subject, I found that some species which have been at risk are making a comeback – such as peregrine falcons which like to nest on concrete towers. The children wrote poems as well, and I particularly liked “I live up on tall hard trees” for the falcon…

It’s sad to learn that sparrows are in rapid decline (it seems due to avian malaria), but I do love the page of sparrows and think it would make an excellent wallpaper design. Look at the silver tower block with its triple satellite dishes – a lot of research went into the yellow warning signs. The one at the bottom is for the boiler room.

And the pink-eared dormouse is another favourite! 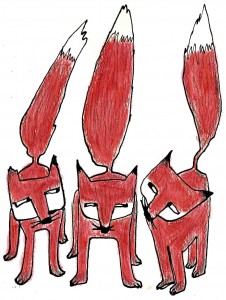