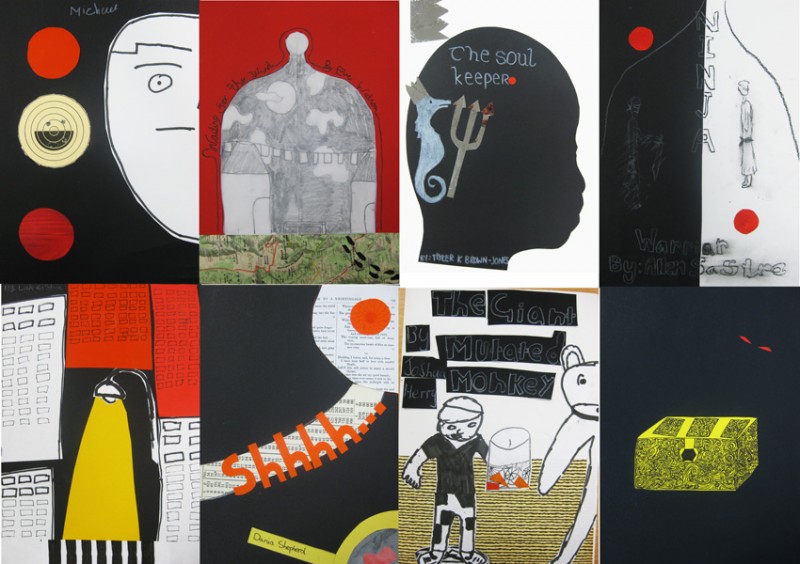 I’ve just spent two days in the Elephant and Castle, at London South Bank University with 9-13 year-olds from various local schools. It was all part of ShoutSouth!, a children’s writing festival organised by CWISL (Children’s Writers and Illustrators in South London). All sorts of writers and illustrators for young people ran workshops aimed at getting the children enthused about writing stories – and the pencils were flying! Many exciting stories emerged in the group I was with, and my job was to get them to design covers for their master-works in the final session.

To begin the workshop I showed everyone a set of images from the fantastic 50 Watts website, which is a tremendous resource for those interested in the history of graphic design. Recently they posted the results of a competition to design book covers influenced by Polish designers of the 50s and 60s, and I thought these could act as a good point of inspiration with their bold designs, simple lines and striking colour choices. A small selection of the children’s work is shown above: I specially like the highly ornate golden treasure chest watched by a sinister pair of red eyes, and the cover for ‘Waiting for the Wind’ where a whole village is encased in a bell jar with mysterious footsteps leading out of it. The bottom-left cover is for an as-yet untitled work about a homeless man and his dog, and the cover really sets the scene for a sense of urban alienation. ‘The Soul Keeper’ tells of a tribe who have seahorses tattooed on the back of their skulls, while ‘Shhhh…’ is about a carved elephant containing secrets of the French revolution. Meanwhile ‘The Giant Mutant Monkey’ has a secret weapon – pinecones which are filled with tiny knives.

It was great fun working with everyone, children, authors and illustrators, and I hope one day I will be able to read the full stories.