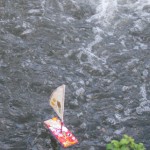 Today was the first of the National Trust London Voices workshops at Morden Hall Park working with families from Liberty School in Mitcham – and it was also the first voyage of the little test ship on the river Wandle. It was lovely to see so many families who had taken part in last year’s project returning and everyone got stuck right in to making some beautiful boat bases. Regular volunteer at the park Fred, who remembers the famous film star parties of the late 40s and early 50s and was rescued by Margaret Lockwood herself when he fell off a wall, was instrumental in the testing, salvaging the boat with a net before it went too far. However by popular demand there were three tests, and on the third the boat tipped down a weir and disappeared under a bridge – emerging some minutes later to huge cheers. Can’t wait for the boat race at the final session!